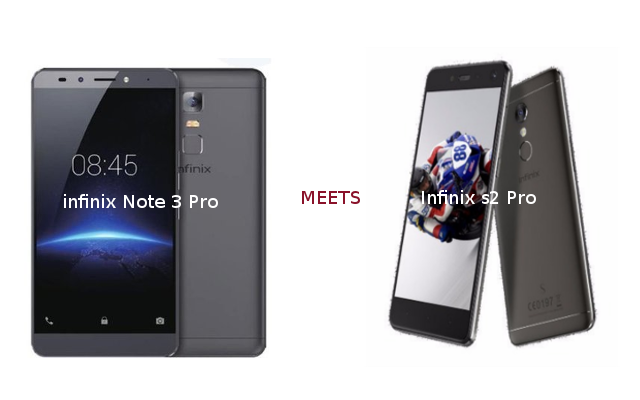 Want to buy either Infinix s2 pro or infinix Note 3 Pro? Thats good! This post will help clarify you on the difference and Similarities between the recent infinix s2 pro and note 3 pro so that you will be able to choose the best device for you.

As a head start, Infinix S2 Pro & Note 3 Pro are both great smart phones from Infinix Mobility, and as at the time of this post they are among the top grossing phones in Nigeria. This is among the reasons why so many people find it difficult to choose between S2 Pro and Note 3 Pro.

Below is a head to head comparison between infinix S2 Pro and infinix Note 3 Pro. The devices will be compared based on their specs or features like camera, Display, Performance, memory, Security and others. At the end of each feature comparison, a verdict will be given on the phone that has a better specs, at the this article a final verdict will be given summing up the overall performance of these phones. 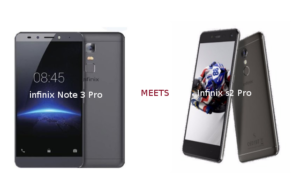 From the specs above it is pretty obvious that infinix s2 pro has a better front camera (13MP unlike 5MP on note 3 Pro). At the back side of both phone is a 13MP primary camera, so both note 3 pro and s2 pro spots the same camera at the back.

See also: Camon CX vs Tecno L9 plus – Differences and similarities, see which is better

Infinix note has bigger 6.0 inches screen size compared to the 5.2-inch screen on S2 pro, so those with smaller hands might prefer S2 pro as it will be very easy hold and use with one hand. Note 3 pro has phablet form factor which is the reason for the larger screen. In terms of the display quality, note 3 has a better Full HD display compared to the lower resolution 720p display on S2 Pro.

Both the battery on note 3 pro and s2 pro are sealed into phone which makes it non removable. Infinix Note 3 pro is packed with a higher 45000 mAh capacity battery compared to the 3000mah on infinix s2 pro. This means that you should expect note 3 pro to last longer than S2 pro.

Check Out: Huawei Phones and Tablet &#8211; Prices in Nigeria

The Storage capacity of note 3 pro (16GB) is smaller than that on Infinix  s2 pro  – 32GB, But both has  support for expansion using an external SD Card up to 128GB. The RAM on both phones are also the same 3GB, which makes multitasking flawless on both phones.

In the security aspect, both phones has support for Fingerprint Reader and other OS related software security options. The operating system on the both phone is android 6.0 Marshmallow which was released by google not long ago.

There is nothing much about in this section, these phones has support for 2G, 3G and 4G LTE so you should expect fast downloads and internet surfing.

In the performance aspect of this comparison, both infinix s2 pro and note 3 pro spots the same 64 bit MTK processor and Mali GPU, you wont notice any speed difference between navigating the phones or doing some activities like playing high graphics games. In addition, Infinix Note 3 pro is noticeably heavier and thicker than infinix s2 pro, so if thats a big deal to you, then you consider it.

Over all, infinix note 3 pro and infinix S2 pro are very nice phones to have, choosing either of these phone now boils down to consumer preference. If you want a phone with smaller screen, larger internal memory, good selfie camera, very thin and light, you should get Infinix S2 Pro. On the other hand, if you want a phone with long lasting battery, big screen size and a better display technology – Infinix Note 3 pro is for You.

This wraps up the comparison between infinix note 3 Pro and Infinix S2 Pro and their differences and similarities. Hope this post was helpful to you in deciding which phone to buy. Leave a comment in the comment section if you have a question or opinion about these phones.