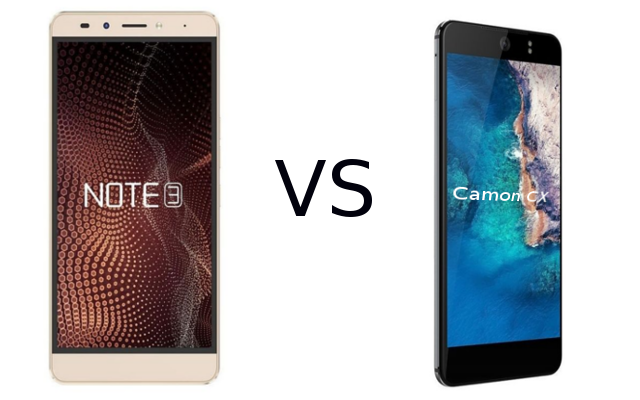 Here’s is a full head to head comparison between Tecno Camon Cx and Infinix Note 3. We’ll see by the end of this comparison the difference and similarities between these two phone, which phone is better in which aspect.

Tecno camon cx is tecno’s latest and popular phone, lets see how it fairs with infinix popular Note 3. This is going to be a feature comparison – based on the specs of both phones, and we’ll be considering each feature (like camera, display, battery, etc) in the sections below.

From the above specs, its very clear that Camon Cx has a better camera compared to that on note 3. The front camera is 5MP on Note 3 and 16 MP on camon cx, judging by the number of pixel, tecno camon cx will a better and brighter selfie photo. Both has support for front flash for taking selfies in dark areas. The rear camera is 16 MP on camon cx  shoot photos with up to 5312 x 2988 pixels while the  13MP on note 3 takes up to 4128 x 3096 pixels, both also has support for LED flash (ring flash on camon cx). Overall, Tecno Camon CX will take a better looking pictures than infinix Note 3.

What the above specs means is that, infinix note 3 has larger screen size (0.5-inches larger) than that on camon cx which is 5.5″. In terms of display quality both offers a full high definition (FHD) display which makes videos, text and images look great these phones, though camon cx’s display is packed with more pixel you wont notice the difference by mere sight.

Winner: Tie (Some prefer larger screen while others don’t)

Having a higher battery capacity, most times means a longer battery life so expect a a better battery life Infinix Note 3. Tecno camon cx has support for fast charging to help fix that lapse, but seriously you will still be charging the phone.

Both device has the same internal storage capacity of 16GB which can be expanded with an sd card up to 128GB, and both also has 2GB of ram for multitasking.

In this aspect, Note 3 has a larger footprint (6.0-inch) than camon cx. You can easily tell that both phone differs from their look. At back of camon cx, the camera is located at the top left edge while the fingerprint sensor is centered, Note 3 has its camera & flash centered at the back with the fingerprint below the LED flash. The centered front camera and dual LED front flash on camon cx also differentiate these phones.

The processor on both phone is Octa CPU with different clock speed, slightly higher (1.5Ghz) clock speed on camon cx. Mali T20 GPU is what powers the graphics on camon cx and note 3 with the one camon cx faster and more recent (MP4 vs MP3). Overall, you might not notice much difference on the day to day of both phones, but camon cx might be more fluid.

Tecno camon cx was launched running the latest version of android at time of this post, Nougat. While infinix note 3 is running on android marshmallow with a planned upgrade to Nougat. In terms of Security, both phones has support for fingerprint sensor at the rear side.

Both phone has support for 2G and 3G but infinix note 3 lacks support for LTE bands. Tecno camon cx more network connectivity with its support 4G lte which offers a lightning fast downloads and browsing experience.

Which of These device is Better?

I will leave you to be the judge of that, tell me in the comment section which of these you think is better.

That’s it on the comparison between tecno camon cx and infinix note 3, feel to drop a comment on your opinions about this phones.